A study led by Osaka City University and Okayama University researchers on Caenorhabditis elegans shows that certain strains of the bacteria Cutibacterium acnes actually prolong the nematode’s lifespan and help its innate immune system fight against the pathogen Staphylococcus aureus. 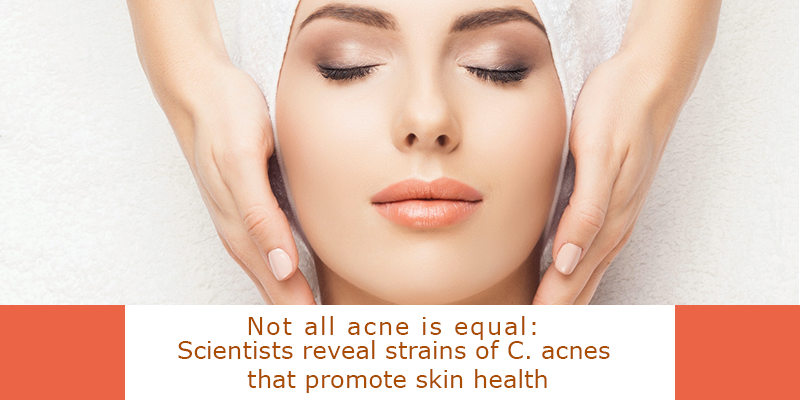 Cutibacterium acnes, a bacteria that is known to cause acne, is also widely spread on people with healthy skin. Recent advances in gene sequencing have shown that differences in the genetic background between strains of bacteria may lead to differing roles in the skin. A new study, done without animal (mammal) testing, shows that the nonpathogenic strain of C. acnes improves the skin’s resistance against the infection-causing bacteria Staphylococcus aureus.

“It is likely that C. acnes maintains skin health by inhibiting common pathogens like S. aureus from invading skin tissue,” said lead author Ayano Tsuru, a graduate student at the Graduate School of Human Life Science, Osaka City University. “Instead of using mammals, we explored this with Caenorhabditis elegans, a 1mm nematode that has basic animal parts like a nervous system, muscles, and digestive tract, as well as a body surface barrier equivalent to human skin.”

In this joint study between the Osaka City University and Okayama University, researchers used C. elegans to investigate the biological effects of several strains of C. acnes isolated from human skin.

Results showed that ribotype (RT) 4 and 8 strains, a classification of bacteria strains based on polymorphisms in rRNA, which are often detected in the skin of individuals suffering from acne, shortened the lifespan of the nematode, while RT6 strains that are often found in the skin of people without acne, did not.

“This means that,” explains supporting author Yumi Hamazaki also a graduate student at the OCU Graduate School of Human Life Science, “ribotype strains of C. acnes that cause acne in humans correlated with virulence, or a shortening the C. elegans lifespan.“

The team further clarified this finding by investigating the effect of healthy skin–associated strains of C. acnes on the nematode’s susceptibility to S. aureus. Results showed the survival period of nematodes infected with the pathogen to be longer than the control group.

Also, RNA sequencing analysis of changes in the gene expression revealed that strains of C. acnes behind healthy skin activated a group of genes related to innate immunity and biological defense responses in C. elegans. “Further analysis of nematode gene mutants” states Professor Shuta Tomida of the Center for Comprehensive Genomic Medicine at Okayama University Hospital, “suggests this resistance to S. aureus was mediated by TIR-1 and p38 MAPK pathways that are responsible for innate immunity and not by suppressing the growth of the S. aureus pathogen.

The implications of this study are wide and exciting.

By focusing on ribotypes related to the absence of acne, this study revealed there are beneficial aspects of acne bacteria, which have had a generally negative image.

As advisor to the study, Eriko Kage-Nakadai, professor at the OCU Graduate School of Human Life Science puts it, “this reminds us that when evaluating the biological effects of certain bacteria, there is a need for a discussion at the strain level. Also,” the professor continues, “the fact that we succeeded in detecting the effects of skin indigenous bacteria using C. elegans illustrates the usefulness of this nematode as an alternative model in the field of epidemiology.”

Lastly, in the landscape of probiotic research currently dominated by bifidobacteria and lactobacillus, the team is excited at the expectation that this study may lead to the application of healthy skin-related strains of C. acnes as a “non-drinking probiotic.”